I got adventurous the other weekend.  I made an amazing flank stead rolled up with all kinds of yumminess inside and grilled it off.  But I was in need of a side dish.  So this post is not about the amazing flank steak, but instead, finding a suitable side dish.  Disappointed?  Sorry.  Maybe I will muster up that post another time!  Since my husband and I were, (or constantly are) in the midst of self-hatred when it comes to diet choices, I figured mashed potatoes were out as a side option.  The kids were so tired of brown rice that they said they would rather have beets.  Ok, so they didn’t say that, but I understood their complaint (considering that my father thinks beets taste like dirt, I never really have tried them, and so I have yet to introduce them into my household).  I  needed something to go with the meat and salad I was preparing, but what do you plug in that fills that carb void?  French fry nachos?  Now that’s a thought…(note for the Superbowl!).  Scrolling through iPad land, I came across a polenta recipe that seemed to fit right in.  It was creamy and had sautéed veggies in it and cheese.  Now I need to sell the family on polenta.  I remember a few years ago though, buying the tube of polenta that you could cut into discs and grill or sauté.  After maybe the second time preparing them…probably topping them with an arugula salad or something…my husband finally told me that he felt he was eating what he described as preformed nastiness – dogfood-like crap, and that I didn’t need to make that dish any longer.  He can be direct.  Looking at this recipe, however, this preparation was different.  The polenta could be cooked in a cast iron skillet on the grill, and you could add to it pretty much whatever you wanted.  Now self-hatred aside, yes, there is cheese, but I didn’t go crazy.  I used some feta and some parmesan.  In another life where I could prance around in a size nothing and bloating didn’t exist, I would opt for cheddar craziness, goat cheese or even gouda….anything else but feta!  But this tasted good.  I was thrilled, and so was the family.  I could cook it right on the grill and not have to jump between the steak and the stove.  Win win!  Plus, it didn’t taste like beets!

polenta with mushrooms and tomatoes on the grill: 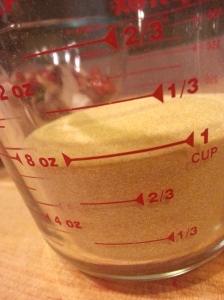 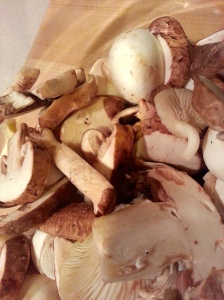 Preheat your grill to medium high heat.  Heat up the stock on your stove or directly on the grill.  Gather all of your ingredients and have them ready at your grill.  Place a 10 inch or larger cast iron skillet on the grill.  Add the butter so it starts to melt.  Add the pancetta and render until browned but not crispy.  Add the polenta and give a quick stir.  Pour the hot broth over, and gently whisk to prevent any lumps forming.  Continue to whisk until the mixture starts to get thick. 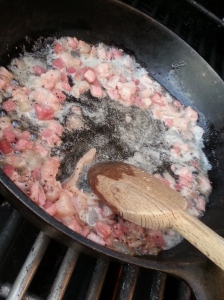 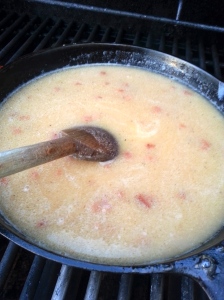 Once thick, add mushrooms, tomatoes and jalapeños.  Stir to combine.  Let cook on the grill for 10 minutes, stirring occasionally.  Add in parmesan and feta and stir to combine.  Add salt and pepper to taste.  If necessary, toast it under the broiler for a minute or two to finish it. 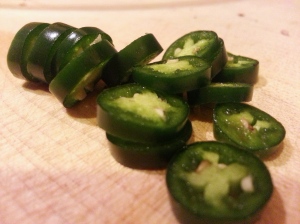 My husband wanted an easy dinner.  That meant he didn’t want a lot of clean up.  We both went through our mental Rolodex (do they make those anymore?) of what we had eaten the last few times together as a family, and since we had recently covered the meat and pasta thing pretty well, I suggested kabobs and brown rice.  I had also been wanting to sneak shrimp back into meals, after my family had boycotted them for some reason, and felt this was a good opportunity to do so.  I got out all my metal grilling sticks, and all the ingredients on the counter and was ready to “throw this together”.  The problem with kabobs and “throwing this together”, is when a Type A personality has to make them.  Give a controlling, detailed oriented, anal retentive person a stick, and tell them to figure out a pattern using a variety of vegetables, shellfish and chicken – you are not setting yourself up for an “easy dinner”.  You are setting yourself up for wondering why it is 8:15, the grill hasn’t been lit yet, and you’re trying to make sure you don’t have an oddball kabob with an uneven amount of zucchini on it.  Oh and there are to be NO helpers in making the kabobs, because everyone else does it wrong.  This last go-round, my darling husband noticed that my kabobs looked color coded and mentioned something about being hungry, which was totally lost on me in the heat of spacing my chicken on the stick at 1/8″ spacing increments, so that they didn’t touch (so the heat circulated…a Bobby Flay tip gone to my head).  I saw my husband trying to put a green bell pepper with a red grape tomato, and it took all I had not to stab his hand.  He could sense the rework of the kabob that was about to take place, and so he chose to find another sporting event on television he otherwise would not watch, until my tetris-like kabobs were completed.
I don’t know what it is.  I like kabobs, and on the surface, they should be easy.  I guess it’s just me.  So I make sure I leave plenty of time to assemble, in case I am having one of those days where six grape tomatoes is just right on a stick and seven is too many.  Over the years, I have had plenty of experiences with the chicken being too dry, the mushrooms burnt to little nuggets and the squash raw, so at least now I know to put like items on a stick.  Armed with this information has made both kabob assembly and grilling a bit smoother, and my man looking at me a bit less like a crazy woman.  (Ok that will never change, but he married me!) 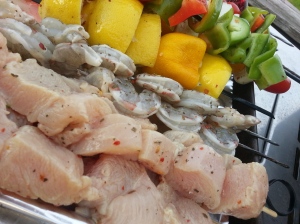 get started on the kabobs:

Place the chicken and shrimp in a medium bowl or in a resealable bag.  Add half the bottle of caesar dressing.  Toss to coat.  Place all the vegetables except for the radicchio in a large bowl and add the remaining dressing.  Toss to coat.  Let everything marinate for 15 – 30 minutes.  If using wooden skewers, you need to pre-soak them so they don’t burn on the grill.  Light your grill and oil the grates.  Start skewering like items.  Skewer all the chicken together – leaving a small bit of space in between so it cooks evenly.   Then the skewer the shrimp – I skewer through the tail and then again through the body of the shrimp so they stay more secure.  Then skewer the squash together, and so on.  Add the radicchio and the onions onto skewers. You can even throw the lemons on a stick or directly on the grill.  Use them afterward to juice onto all the grilled meat and veggies. 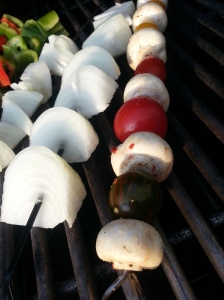 Place the chicken skewers and squash skewers on the grill first.  After a few minutes, add the remaining vegetable skewers.  After turning the chicken and veggies, add the shrimp skewers.  Do not use leftover marinade from shrimp and chicken to baste anything on the grill – but you can use anything left over from the veggie bowl.  Take food off the grill as it reaches its level of doneness.  Use a cooking thermometer to check the chicken – 155 degrees it can come off the grill and under some foil to finish cooking.
Cook up some brown rice or couscous and squeeze the lemons and shake on some hot sauce, and you have fed 4 hungry people easy. 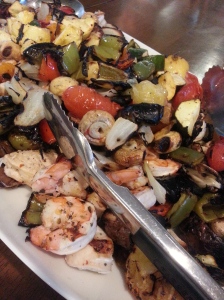 People always talk about shedding pounds after the holidays.  Unfortunately in this household, the holiday weight gain period extends through to the Super Bowl.  It’s flattering to hear that there are people who look forward to the get-together at our house every year, so I must be doing something right, right?  Or is it the guilty pleasure of devouring a 7-layer dip and fried buffalo chicken balls that brings everyone back?  Whatever it is, I don’t care.  Unlike the orchestrated Thanksgiving or Easter meals, the Super Bowl is a nosh-worthy event.  I throw everything onto a table and I sit back and enjoy the game, (or in this year’s case, not enjoy the game so much, but more so my friends and David Beckham).  So this time, I made a concerted effort to try to incorporate some healthier dishes without going all vegan on my guests (not that there is anything wrong with vegan!)  What is funny, is that the couscous salad sat, so did the potato salad made healthier with greek yogurt.  Anything remotely like a taco-cheese-like substance is always a big seller.  So are the veggie dips and ranch dressing.  But all my energy wasn’t wasted in trying to tone down my frowny-faced caloric menu, because I found one healthy appetizer that sold….quickly.  Ok so it has cheese.  But still, it wasn’t fried or dripping with steak juice.  These little mozzarella, basil and tomato bites were a hit.  Plus they are easy to prepare and apparently don’t sit very long!  I love the fact that you can tailor the amount to what you feel like.  I made them one night for myself and a friend, so we just made six.  Ok so we also made three other appetizers and shrimp étouffée, oh and uh, a smoothie made with Bud Light and peanut butter, but that is another story for another time.  (Or maybe I’ll just let that one go…)

get started on the wonton cups:

Preheat oven to 400 degrees.  Add your diced mozzarella and tomato in a medium bowl.  Add the olive oil and toss to coat. Add crushed red pepper, salt and pepper to taste.  Prepare two muffin tins by spraying with non-stick spray.  Taking two wrappers at a time, rotate the top one a quarter turn and press both wrappers into the muffin cup.  Continue to fill each muffin cup until all 24 cups are pressed in.
Equally spoon mozzarella mixture into each cup and top with sliced basil.  Bake in the oven for 10 minutes or until cheese is melted and wrappers turn golden brown.