I had made a braised artichoke appetizer a few weeks back, and it called for it to be drizzled with a tomato coulis.  I wasn’t sure entirely what a coulis was, but decided to give it a try.  I loved the coulis better than the artichokes!  I would use this on almost anything – from fish, to crostini, to kabobs.  I might be telling you something you already know, but this was my coulis moment.  Now, as you can see, I made this in the winter, but I made sure that I bought the most flavorful tomatoes I could find.  I can’t wait to make this with heirloom varieties in the summer with all the different color tomatoes…yum.
I decided to tweak the recipe from Cooking Light, because I wanted a smoother sauce than what was produced by my food processor.   If I had used a blender like the recipe called for, I wonder if tweaking would not have been necessary.  Drizzle away… 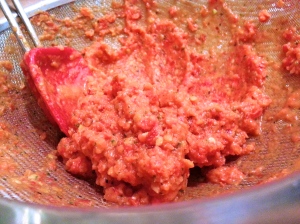 get started on coulis:

In a food processor, puree the fresh tomatoes with the drained sun-dried tomatoes, garlic, olive oil, basil and crushed red pepper.  Season with salt and black pepper.  Strain mixture over a bowl, pressing solids to release all liquid.  Refrigerate until ready to serve.

note:  as said earlier, you can opt to do this in a blender and not strain the mixture for a slightly thicker texture.

Changing the Way You Look at Food