I am tired of french fries.  I never thought I’d hear myself say that, but it’s true, and it’s because of baseball.   Soccer you aren’t even given bleachers, let alone  a place to buy a snack.  You endured the game with whatever you felt like packing, if anything at all.  Now that the kids are older and play organized baseball and softball, it seems that every town we play in, including our own, has the much beloved snack shack.  What used to be an occasional treat has now become a nightly offering that I have to fend off.  Fries, soft pretzels, slushies, soda and Big League Chew are being requested  left and right, and there isn’t much I can do but give in to the madness.  I have done everything I can think of to fend off the greasy magnetism of that shack but I keep losing.  I pack fruit, nuts, Goldfish but fries seem to make it into the mix anyway.  I have fed the kids dinner at 4pm, but by the start of the game at six, the one that isn’t playing is asking for skittles or fries.  Then after the game is over, the one who played thinks they deserve an ice cream or yet again – fries.  And to top it off, there is nothing worse than stealing one of your kid’s fries and it turns out to be a lukewarm, soggy mess.  I mean, if you are going to indulge, it better be worth it, right?
So in honor of the potato, I felt like doing it justice this past weekend.  We had family and friends over and were grilling steaks, and although I have a “go to” recipe for crispy oven-roasted potatoes, I saw this one and knew that the bacon would be a hit with everyone.   So I put my girlfriend to work wrapping them up, and by the looks of the empty bowl at the end of dinner, I’d say that I became a potato fan again – we all did. 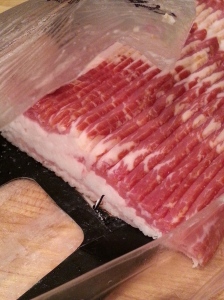 get started on the potatoes:

Preheat oven to 425.  Coat a jelly roll pan with non-stick cooking spray.  Sprinkle potato wedges with kosher salt.  Wrap each potato wedge with the halved slice of bacon.  Arrange potato wedges in a single layer on the cooking sheet.  Bake at 425 for 40 – 45 minutes or until bacon is crisp and browned. 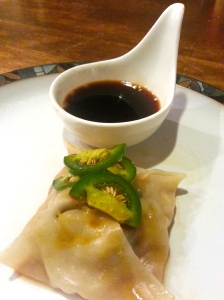 I have always vowed that I wouldn’t be that mother that served dinner like a diner.  For the most part, I have upheld that vow.  My kids have always been pretty good about trying different things and we are lucky they eat what I serve.  That is probably attributed to the fact that they have learned that if they don’t like it, they get the ‘too bad’ face, and the ‘better luck next time!’ shrug (insert emoticon here).  Now I am not completely insensitive to their ever-changing preferences or aversions, but I don’t cater to just their favorites either.  If I did, I’d be eating orzo and hot dogs everyday.  Right now, my daughter seems to be anti-red sauce so she is getting zero sympathy from me in that department.  One dish we all can agree on though, is pot stickers.  Maybe because it is similar to ravioli or tortellini which the kiddies love.  My problem is that I need to be sure I don’t eat 30 of the tiny pockets of yumminess.  If you check out the original recipe, it calls for only 8 ounces of pork, whereas I used twice that.  I have issue with using parts of packages, or 1/2 of a can of something, so I tend to modify recipes to try to use things in their entirety.   This does produce mass amounts of food sometimes, but in most cases, it equals another dish the next day, or a frozen mixture for round two down the road.  I would rather refrigerate or freeze a meal, or the mixture for a meal, than have a leftover can of corn or  frozen blob of pork.
I was only feeding three of us this time, so I only made 18 pot stickers and kept the pork mixture and used it in a cold noodle salad for four of us the following day for lunch.  It also would work on a salad with an orange vinaigrette.  Leftovers are heaven.  Otherwise this would make 36-40 pot stickers. 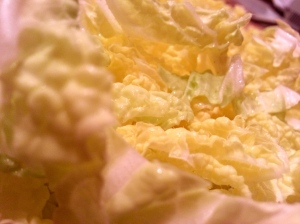 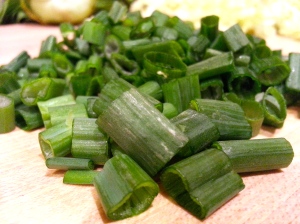 get started on the pot stickers:

Heat a large nonstick skillet over medium-high heat.  Coat pan with cooking spray.  Add pork and cook 6 minutes or until almost done, stirring to break up into tiny pieces.  Add green onions, jalapeño and ginger and stir to combine.  Add soy sauce and sesame oil cooking for another minute.  Stir in carrots and cook for a minute, then add the cabbage and cook until cabbage just wilts.  Remove from heat and cool slightly. 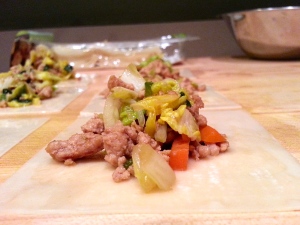 Place a small bowl of water near where you will be assembling the pot stickers.  Lay out six wonton wrappers, keeping the remaining under a damp paper towel (so they don’t dry out).  Spoon a teaspoon of the pork mixture into the center of the wonton.  Moisten the edges around the mixture with water, using your finger or a brush.  Take opposite corners of the wrapper and fold and seal and then fold up the remaining corners and pinch to seal at the top.  If any edges aren’t sealed completely, dab with water and pinch closed. 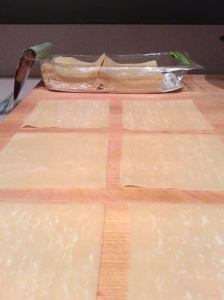 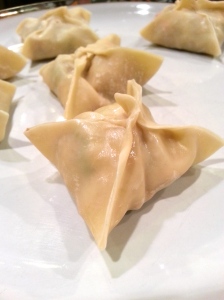 Heat peanut oil in a large nonstick skillet over medium heat.  Arrange six pot stickers in the pan in a single layer.  Cook two minutes or until browned on the bottom.  Add 1 cup of water to the pan and cover and cook 4-5 minutes.  Uncover, and cook until liquid evaporates, about 2 minutes.  Meanwhile, assemble the next six pot stickers.  Serve immediately with soy sauce or your choice of dipping sauce. (jacked up with jalapeños!) 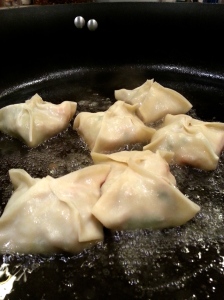 note:  serving portion is 3 pot stickers at about 120 calories total.  (so obviously eating 30 is not recommended!)  Depending on how many pot stickers you want and can fit into your pan, realize that you need to cover your batches to keep warm and moist, as it is 7+ minutes until the next batch is ready.  YUM!

Ok, I know this isn’t the most beautiful picture in the world but it’s a real one.

I love football season.  I don’t say that because I like to kick back and scream/cheer at the television, or monitor the spreads (can’t figure them out anyway), or follow a fantasy team.  I love it because it means time in the kitchen, pumping out food for a crowd that has gathered in our family room and spending time with them.  I guess you could say that over time, our house has evolved into the football open house.  Of course, if you are a fan from the opposing team you might not be welcomed that weekend.  But I digress. We could have a crowd of 6 guys one Sunday, close family the next week or it could be a gathering of 3 families with kids running around.  I like that variety.  It has probably helped me branch out and try new meals, catering to the new group I have in my house that day.  I love the fact that it is an all day event, with people coming and going, and I can easily plan my food prep and still visit with people.  I like to think I have the Sunday tradition down to a science, where some appetizers are made for the one o’clock game and the main dish gets served during half-time of the four o’clock game.  Maybe it’s strange to enjoy spending the day in the kitchen, but I like it.  Usually, I will make something I am comfortable with that are fan favorites, and then change it up and try a new side dish or appetizer.  If it fails – bring out the chips.  I even got giddy one weekend recently (not a term used to describe me), because we found out our kid’s soccer game was cancelled, so that meant more “me” time in the kitchen.  I know, I have issues.

‘barbecued’ baby back ribs (from the Cooking Channel, Chuck’s Day Off)

2  stalks celery
2  onions
2  large carrots
2  heads of garlic
3  apples (I had Gala in my house at the time)
3  TB canola oil
3  racks baby back pork ribs
salt and pepper
flour, for dredging

get started on the glaze:

In a large mixing bowl, combine the Worcestershire sauce, ketchup, cider vinegar, soy and maple syrup and stir to combine.  Chop up desired amount of chipotle peppers and add to mixture.  Let stand until needed. 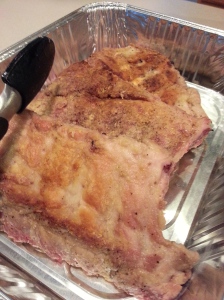 get started on ribs:

Preheat oven to 300.  Take the rack of ribs and cut them in half.  Season with salt and pepper.  Add flour to one of the foil pans.  Add the ribs and dredge both sides of each section so fully coated.  Place a large roasting pan on the stove on high heat (could cover two burners), and add canola oil.  When the oil is hot, shake off the excess flour and place ribs (I did three at a time) in the pan, and sear on one side.  After nice brown sear has developed, you can then flip them.  It will take about 4 to 5 minutes per side.  Remove ribs from heat and place in the other foil pan to rest while finishing the remaining ribs.  Once ribs are done, drain the excess oil from the pan, but leave any meaty bits that remain in the pan. 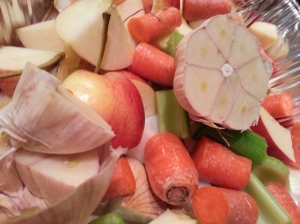 While the ribs are browning, cut all the vegetables into nice thick chunks.  Halve the garlic and quarter the apples.  Do not remove the skins on anything because all will be strained later.  Add all the vegetables, apples and the herbs in to the roasting pan.  Keep the heat up to caramelize them.  After a few minutes, toss them and let them sit a few minutes longer.  Return the ribs to the pan (you may have to slightly layer them to get them to fit). Add the liquids to the cooking pan.  Add the wine and then add enough water, if needed, to ensure the ribs are just barely covered.  Bring the mixture to a boil.  Turn stove off and cover the pan with foil and place them in the oven until the ribs are barely fork tender – about 1 1/2 hours.

Remove the meat from the pot and cut into rib sections and set aside.  Strain the solids out of the liquid and return the liquid to the pan and reduce by half (about 15 minutes) to make the barbecue glaze.  When nearly done, remove about a 1/2 cup of liquid and place in a small liquid measuring cup.  Add the potato or corn starch and whisk until smooth.  Add the starch mixture back into the reduced glaze.  This will help thicken the glaze.  Toss the ribs back into the glaze to warm and coat them.  Mound the ribs on a platter (or in the pan and let the guests help themselves) and serve! 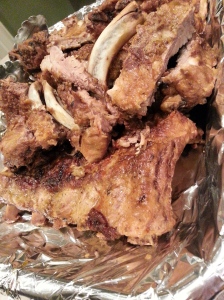 This recipe serves four people.  I noted earlier that after straining the liquid I had a lot to reduce.  I think next time I will take half the liquid and then start to reduce.  I should have a nice glaze next time rather than waiting 30 minutes!  Still tasted great and the ribs were super tender.